Histocompatibility and Immunogenetics (H&I) has traditionally focused on HLA as the major polymorphic antigen to which alloantibodies can effect a negative outcome, whether it be graft loss in transplantation or an adverse outcome post-transfusion.  The clinical relevance of alloantibody formation against other polymorphic antigens (HPA, HNA and MICA) is also recognised.  The Collaborative Transplant Study (CTS; 2005) 35 highlighted the loss of renal allografts in HLA identical sibling transplants (with a significantly increased prevalence in sensitised recipients), indicating that non-HLA factors are detrimental to graft outcome.  A growing body of evidence suggests that autologous antibodies (autoantibodies) may be important in determining the outcome of kidney 1-9, 25, 27,29-31, pancreas 10-13, liver 26, heart 14-19, lung 20-22, 28, 32-34 and haematopoietic stem cell 23-24 transplants.  Released in Autumn 2017, the One Lambda LABScreen™ Autoantibody assay utilises Luminex® xMAP® technology to deliver multiplex screening for antibodies to 39 antigens.  In many instances cognate autoantibodies have been described in the literature, using detection methods such ELISA and western blotting that are unavailable commercially and unsuitable for routine clinical investigation.

Autoreactive B cells are largely destroyed by negative selection but a small number reactive to self-antigens remain in the periphery with the ability to expand and differentiate into mature B cells and autoantibody-producing plasma cells.  Autoantibodies have been described to both extracellular and intracellular antigens (e.g. Angiotensin II receptor type 1 (AT1R) and vimentin respectively); hidden antigens may become exposed due to tissue injury (resulting in e.g. endothelial cell damage).  Tissue injury may be a result of the patient’s underlying clinical condition, infection, drug toxicity (e.g. calcineurin inhibitors) and the transplant itself: vascular injury and repair, ischemic injury and the classical alloimmune response.  Cognate autoantigens have also been identified in extracellular vesicles derived from the donor graft 37.

Autoantibodies may act as incidental biomarkers for tissue injury or may themselves be deleterious: actively contributing to the observed pathology.  In contrast to HLA-specific alloantibodies (where complement-binding antibodies are considered more injurious), the diversity of autoantibody targets ensures the mechanisms of pathology are similarly diverse 36.  For example: antibodies to K-alpha1 tubulin and collagen V cause inflammation and proliferation, contributing to bronchiolitis obliterans syndrome 20-22; and antibodies to AT1R activate the receptor and cause malignant hypertension in addition to direct graft damage 38-39.  Graft damage in the absence of complement activation can result from the recruitment and activation of immune cells (through e.g. increased expression of cell adhesion and HLA molecules, and proinflammatory cytokines), and non-complement fixing autoantibodies act synergistically alongside complement-fixing antibodies 42 and additionally facilitate T cell activation 41. 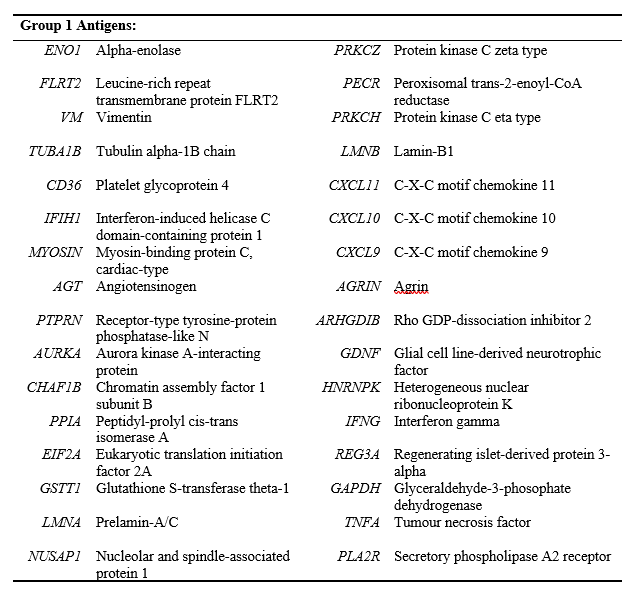 LABScreen™ Autoantibody currently consists of two panel groups of microparticles coated with purified non-HLA antigens, with a third panel group in development.  The following antigens are represented on Group 1, whilst Group 2 detects antibodies against the Perlecan fragment LG3.

LABScreen™ Autoantibody employs single antigen bead technology and follows the familiar LABScreen workflow (Figure 1) with the only difference being centrifugation speed (1800 x g vs. 1300 x g).  Group 1 (Cat. No. LSAUT1) and Group 2 (LSAUT2) are purchased separately but can be combined in a single run for ease of use.  Specific LABScreen™ Autoantibody Negative and Positive Control Sera (LSAUT-NC and LSAUT-PC) are also available.  Once completed, the assay can be read using either a Luminex® LABScan 100/200 or LABScan3D instrument. 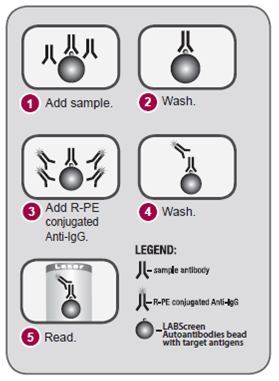 In contrast to HLA-specific antibodies, non-transplanted individuals may exhibit reactivity against self-antigens.  As such, positive and negative reactions are determined by considering reference background values determined by screening over 125 non-transplanted individuals.  Three MFI ranges are generated with each indicating the percentile of the population with reactivity less than or equal to the specified value (75%, 85% or 95%).  For example, Figure 2 indicates reactivity of the reference population against Vimentin, with a relatively narrow distribution.  Analysis is performed in HLA Fusion™ Research 6.1 or higher (Figure 3) with the user able to specify the cut-off with increasing specificity: moving from 75% to 85% to 95% raises the cut-off for each bead (i.e. against each antigen).  Users are also able to change the cut-off based upon local experience. 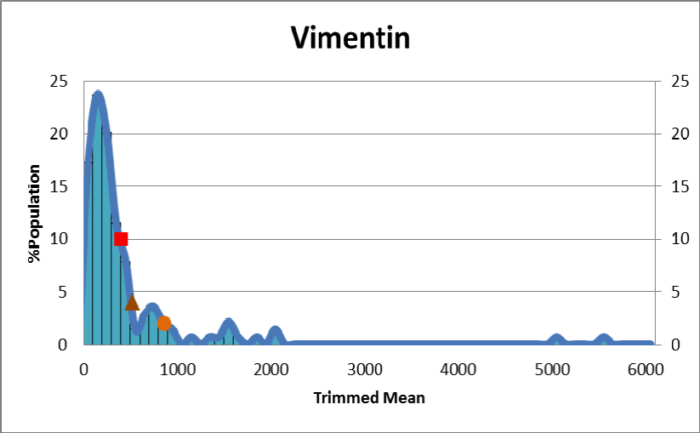 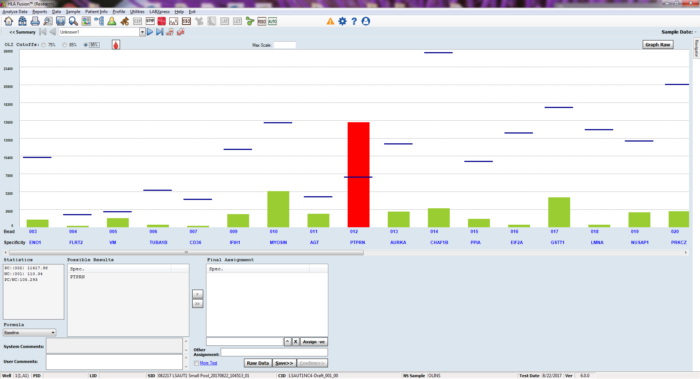 LABScreen™ Autoantibody is a novel tool for the detection of autologous antibodies that utilises an established, user-friendly methodology.  LABScreen™ Autoantibody will allow us to further investigate the prevalence of specific autoantibodies and correlate these to clinical events (including acute rejection episodes and chronic graft loss) as indicated in the literature 1-43.  Ultimately, the characterisation and longitudinal monitoring of autoantibodies, and informed intervention ought to bring clinical benefit by avoiding unnecessary graft loss and by prolonging graft life.

The prevalence of autologous antibodies in non-transplanted individuals and as potential biomarkers for previous tissue injury raises some interesting questions as to the utility of LABScreen™ Autoantibody within H&I laboratories.  Jackson et al. (2012) describe a patient case in which three kidney grafts were hyperacutely rejected due to autoantibodies 40, demonstrating that the clinical implications of non-HLA antibodies can be profound.  LABScreen™ Autoantibody will certainly be valuable in investigating unexplained (non-HLA) transplant rejection, either retrospectively or as required: the Banff 2017 update already recommends testing for non-HLA antibodies in the absence of HLA specific antibodies 43.  LABScreen™ Autoantibody will also aid the interpretation of pre- and peri-transplant crossmatches, allowing a more informed risk assessment where a positive result is obtained in the absence of current donor-directed HLA antibodies.

When investigating autoantibodies for cause, it will be important to established whether any detected antibodies are de novo and thus potentially causative, or whether the autoantibodies are potentially inert and/or biomarkers of previous sensitising events.  Thus a pre- and post-event comparison is required; this may be performed as required, or centres may choose to routinely screen patients using LABScreen™ Autoantibody.  CTS data 35 suggest that highly sensitised patients (>50% PRA) lose their HLA-matched grafts faster than less sensitised patients, and early data indicate that autoantibodies are more prevalent in patients awaiting a second or subsequent transplants 44; thus it might be pertinent to routinely screen these patient cohorts for autoantibodies as a minimum.