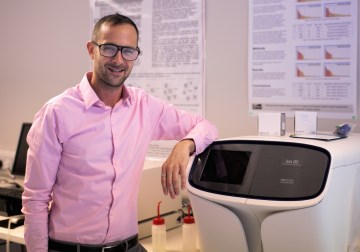 Ben Adams has joined VH Bio as our new HLA technical specialist. He joins the company with an outstanding background in histocompatibility and immunogenetics and having worked closely with VH Bio in previous roles.

Ben graduated with a BSc (Hons) in Virology in 2003, having studied predominantly at the University of Edinburgh but with a year at Uppsala University, Sweden.

In this role, Ben was involved in the work-up and monitoring of patients receiving blood and marrow transplantation, and in the transplantation of solid organs through his contribution to a 24/7 on-call rota.

Ben continued his education, obtaining the Royal College of Pathologists Associate Membership in autumn 2013, and is currently enrolled in his final year of a part-time Postgraduate Diploma (Leadership and Management in the Healthcare Sciences) at the University of Manchester.

Ben said: “I have maintained a broad awareness of the transplantation field yet developed expertise in various PCR-driven methodologies, including more recently next-generation sequencing.

“This has complemented a clinical interest in the safer facilitation of blood and marrow transplantation, with a research interest in permissible mismatching and donor-directed antibodies.

“My technical strengths in robust and emerging technologies and as a trainer and educator meant that my joining VH Bio was a positive change in the direction of my career, having worked closely with the VH Bio team for the duration of my clinical career.”

Outside work, Ben is a keen runner and recently completed the Kielder Marathon, his sixth marathon in total.